We’re almost there. We’re stuck with a couple more days of shivery weather, but even if the remnants of ice hold out through those, Thursday’s warmth—currently expected to reach 14°C—will wipe them out. Of course, even while it’s cold, wind and wave action are working to destroy ice every hour.

In preparation for today’s radio chat with Ken O’Neil at Q-104, I was updating my graphs, and I noticed something.

Let’s say the ice holds out another day or two. The Brick Graph will look like this.

For this graph, I put the date the lake is 100% clear of ice into a five-day period (because sometimes I’m not sure of the exact date). So you can see we had a pretty early thaw this year, probably the third earliest of this century.

The Pancake Graph puts a slightly different spin on it.

You can click on this graph to enlarge it. 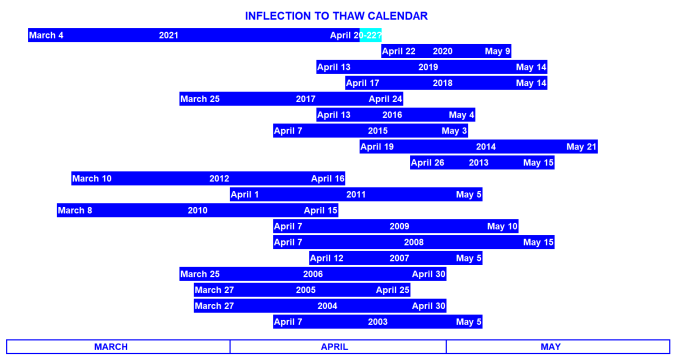 This graph, more formally called the Inflection to Thaw Calendar, gives each year a bar that starts on the date of the Inflection Point* and ends when the lake is ice free. Two things jump out at me here:

First, despite starting early, this is the slowest thaw on the chart. We hit consistently above freezing temperatures early, but they were barely above freezing. As far as defining it by air temperature is concerned, the thaw looks set to drag on to about 48 days.

*The Inflection Point is when the Mean Daily Temperature rose above freezing for keeps.

**In terms of air temperature, anyway. On this graph, the 2020 thaw was fast, at 18 days. It does not take into account that water currents would have been thinning the ice from below while the air was still cold.

“Huh,” I said. “Do I have any photographs from late April last year in the archives?”

Do I! Check this out:

This photo was sent to me by Bruce White, who works (or worked, perhaps, as the air transport industry is in terrible shape right now) for Air Canada, as his flight passed along the south shore of Lake of the Woods. It looks north, with Big Island at the bottom of the frame, and the Alneau Peninsula prominent in the middle. This time last year, the whole lake was frozen over.

Other photos taken at this time last year show the ice from lower altitudes, and it looks hard and white, with little snow cover. You can use the Archive Tool (located on this web page’s right hand sidebar) to visit the Ice Patrol posts from April of 2020, or any other spring month in recent years.

Also, you might recall that in 2014, the year Ice Patrol debuted as a fully fledged web site*, there was real concern that the lake might not be open for the May long weekend. We made it, but barely.

*Ice Patrol began in the nineties, as verbal reports to friends, and grew to an informal email thing before launching as a WordPress blog in 2014.

By the way, on this site, “ice free” means it’s all gone. 100%. Not enough ice left to make a Margarita! Why? Because although many lake dwellers can reach their camps when the lake is mostly open, not all can. In fact, this whole project started because I had friends who bought a camp by an ice road, and were frustrated that they couldn’t get there by boat when most other cottagers were happily cleaning up the mouse poop and putting out the patio furniture.

Okay, maybe happily isn’t the right word, but hey, we all have PPE now! It would be wise to wear your mask and gloves while cleaning your kitchen counters, and it is especially important if your property is gifted with raccoon droppings, because they pose a significant health hazard.

So, aside from the whole miserable Covid thing, we’re having a good spring. I have some friends flying this week, so I hope to get pictures of the last ice in the next few days, weather permitting.

Map of Lake of the Woods