I don’t think anyone will be taking new aerial photographs today; the visibility is down to about a kilometer in snow.

But Shaun Clifford did send me this pair of pictures, taken 24 hours apart:

It’s a good thing Kelly Belair went flying yesterday with his partner Ashley Kolisnik to see how much ice is left.

You can click on these images to see larger, full screen versions.

12 Mile Portage cuts across a narrow part of Shammis Island, and is a regular route for an ice road. This view looks north and the ice on the north side of the Barrier Islands is pretty rotten.

This shot looks north east from over Scotty Island. Nanton Island, Bell’s Island and Lunny Island are at the left edge of the frame. Part of Middle Island is at the right, including Heaps Point. You can see how the remnants of the ice roads are helping to hold the weak ice together. 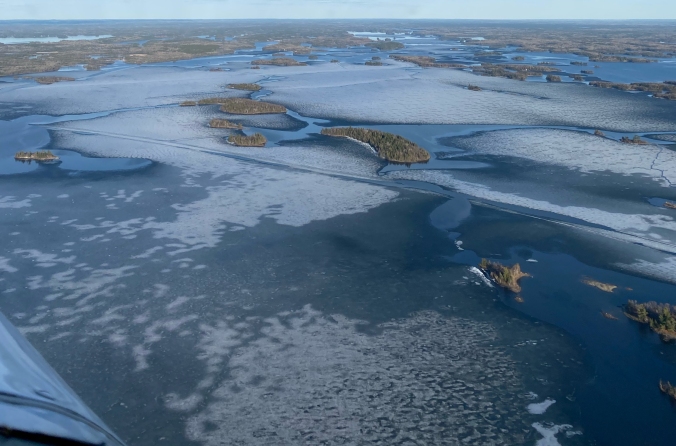 Gaberty Island and Slate Island are near the middle of this picture that looks east into Andrew Bay. Moore Bay is in the distance to the left of center, and shining in the upper left corner is the south east end of Bigstone Bay.

You may have realized that the emphasis at Ice Patrol has shifted from photographing the water to photographing the ice. This happens naturally, as the lake goes from almost entirely frozen over, to nearly open. So yes, the lake is down to less than 10% ice covered. Pretty much everything you don’t see in these pictures is ice-free.

There is still significant ice in the Manitou, and on Shoal Lake. Kelly reports that most small lakes in the Kenora area are clear.

Kelly’s assessment is that this ice will all be gone in a couple of days, which would put us right on Sean Cockrem’s estimate of ice free on April 20th. He said that on the 24th of March, by the way.

Thursday will be warm, with temperatures rising into the double digits, so I think that’s the longest any remnants of ice could last. But Monday and Tuesday are barely expected to top freezing, so I think some ice could hold on that long, and perhaps into Wednesday, when it’s starting to turn only a little warmer.

Oh, I almost forgot: the Coney Island footbridge is scheduled to come out tomorrow, weather permitting, or later next week if Monday’s weather is unsuitable. That will open up the waterways for boats from Kenora to head out onto the lake through Devil’s Gap.

Map of Lake of the Woods