I’ve been talking a lot about how favourable our conditions are this year. We had a mild winter that formed less ice than usual. We had an early start to the thaw, and we’ve had mostly higher than normal temperatures. Conditions seemed primed for a record-breaking early ice-out, but that’s not developing.

I’m not saying this year’s thaw is getting delayed, but I am pointing out that it’s gradual.  Gentle reminder that neither Sean or I predicted records would fall.

We’ve had years in the past, notably 2010 and 2012, where the thaw started almost as early as this year, and the ice was gone pretty quick. But I think we’ve begun to lag behind the progress of those years.

I’ll pop the pancake graph in here so you can see what I’m talking about.

You can click on it to see an enlarged, easier to read version. 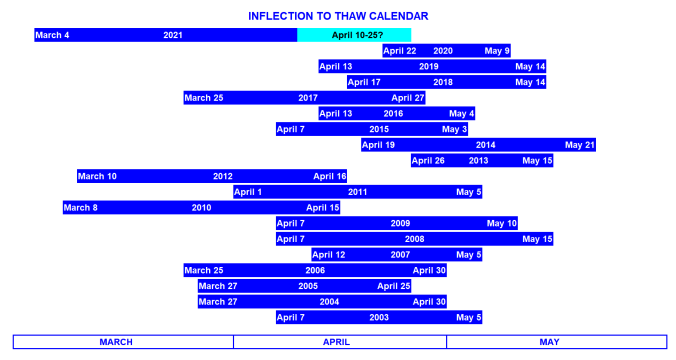 Remember, each year since 2003 (at the bottom) gets a bar that starts on the inflection date* and ends when the lake is 100% ice-free. The first thing you might notice is that 2021’s line begins earlier than any other. And yet, it looks set to be one of the longest, representing a surprisingly drawn-out thaw for a warm spring following a mild winter.

*Inflection point or inflection date means the date when the air temperature started to average out at above freezing. More precisely, when the Mean Daily Temperature rose above zero Celsius on a lasting basis.

The two years that come closest to our starting point are 2010, at March 8, and 2012, at March 10. Both of those years had reasonably quick thaws, at less than 5½ weeks. [38 & 37 days, respectively, but who’s counting?] To match that, we’d want to be looking at a total thaw by April 10. So that’s where I began the pale blue of uncertainty on this year’s bar. But Sean Cockrem’s prediction, based on presumed ice thickness and air temperatures forecast, is April 20. Side note: this is his stated and preferred estimate, but his simplest formula, without intuitive insights, produced a date of April 25, so I ran the uncertainty zone out that far.

There are two things going on here. First, the earlier you start, the longer it can take, simply because March is apt to be cooler than April, even if temperatures are running above average. Second, air temperature is not the whole story when it comes to getting rid of lake ice. Sean’s model uses data from past years, and that data is all over the map. In other words, every thaw is different, which is why Sean has to make some educated guesses as to what kind of year we’re having.

Last year we got schooled. After air temperatures stayed depressingly low, the ice went in a hurry  (17 days!) There are many factors other than air temperature: snow cover, rain, wind, sunshine and so on. But I increasingly suspect that the biggest one is current.

Most years that I can recall, the water seemed to open up through the Keewatin Channel faster than this year. Sometimes the water spreads from Channel Island to Safety Bay quite quickly. This year it seems to be rather lethargic.

So I happened to be talking  with some friends on Zoom, and one who lives on Golf Course Bay remarked that this winter, the end of their dock iced in for the first time ever. Usually, the current swirling past the tip of their dock prevents ice from forming there, and the ice is notoriously thin in the whole area around the Coast Guard docks. This sparked a conversation about how—although the lake ice was generally thin—the low current allowed people to route some ice roads through usually untenable areas.

To talk about current, we need to check in with the Lake of the Woods Control Board, who strive to keep lake levels safe by altering the outflow through the Norman Dam. Spring is the season when that typically gets trickiest. It’s prudent to keep the lake levels on the low side in March, to allow for spring run-off and flooding. They call this the winter drawdown, and it’s part of their regular strategy. It’s usually followed by the spring refill. This year there wasn’t  much spring run-off, so lake levels have not risen as rapidly as some other years. So the outflow is being kept low, to give the lake levels a chance to rebound.

Here’s the latest bulletin from the Board.

The current level of Lake of the Woods is 322.42 m (1057.8 ft), a 40th percentile level for this time of year. The average lake level changed little over the past week and is expected to remain stable or slightly increase (less than 2 cm or 1 in) over the next week.

Lake of the Woods authorized outflow is 150 m³/s with no changes scheduled.

This time last year, when we had that very rapid thaw, the outflow was nearly four times as high. The current was probably eating away at the ice from below long before the air temperature rose above freezing.

From the air, this shows as open water in the narrows and channels, and ever since I started Ice Patrol, I’ve been paying close attention to those areas. It makes perfect sense that progress of that type is slow this year, despite the mild weather.

So while current is a big factor, its role this year will be passive. Which is one less wild card for Sean’s predictive model.

A Setback and an Opportunity