Some new aerial photographs from Josh Broten, and also the first drone picture of the year, taken by George Dyker over Clytie Bay, a popular cottage area on Shoal Lake. All were taken Saturday.

You can click on these pictures to see them full screen and full size.

Looking north from over the Northwest Angle towards Shoal Lake. Lots of water and only pan ice in the Angle. In the distance, the ice looks poor on Shoal.

Here’s a slightly closer look at Shoal, with the camera pointing north west over Monument Bay, so that Shoal Lakes large Dominique and Stevens Island appear side by side. Mason Lake and part of Reid Lake are a the right side of the frame. 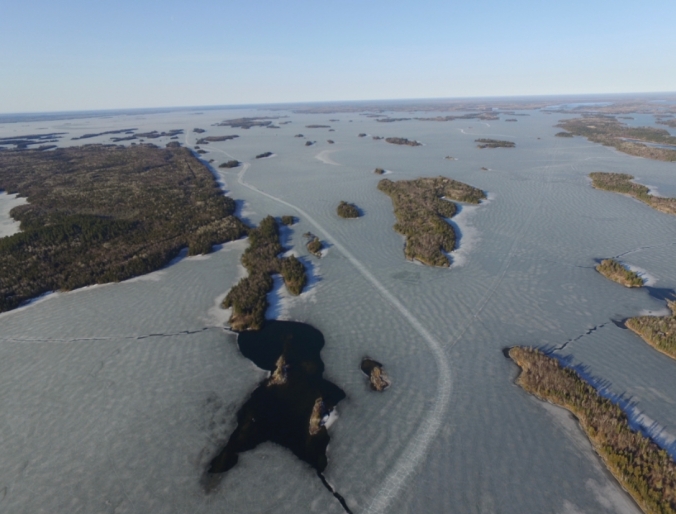 This view looks south west, with the open water at Gateway Point in the foreground. That ice road that heads off onto the main body of the lake looks to be in one piece, but it’s riddled with cracks.

Now, back to our tour with Josh’s Cub, picking things up at the south end of the lake, where Josh is based.

We’re back by the NW Angle, looking at the area by the international border. The open water is mainly by Flag Island, which has a webcam, by the way. You can find a link to it on the Lake of the Woods Links sidebar.*

*When viewed on a desktop or large tablet, Ice Patrol offers a number of features on a sidebar to the right of the main column. These include Recent Comments, a Search Tool, a Flag Counter, the Archive Tool, and an extensive list of links that may be of interest to lake dwellers and visitors.  However, if you’re in the habit of viewing Ice Patrol on a phone, or via the email subscriber list, you may not see the sidebar.

Looking south. The patch of open water in the foreground is right at Oak Point, and there’s open water almost all the way through Big Narrows. At the left, on the far side of Big Narrows Island and Tranquil Channel, there’s some open water through French Portage Narrows.

Looking north west, with Chisholm Island at the bottom of the frame, and Cliff Island at the left. The Alneau Peninsula is just off the picture to the left, and the Barrier Islands are near the upper right corner. Prominent pressure ridges show the strain on the ice.

Let’s finish Josh’s tour with a shot of the Kenora area.

The ice is weakening, slowly but steadily. Warm temperatures all week, with daily highs in the double digits, should help.

In the meantime, a reminder. Ontario went back into a province-wide lockdown on Saturday, April 3rd, and is expected to stay that way for a four week “emergency brake.” Hairdressers are closed, restaurants are take-out only, and stores are restricted to half or quarter occupancy, depending on how essential they are. More details here.

A Setback and an Opportunity